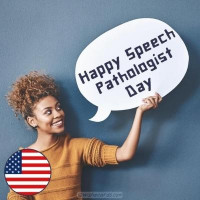 Beginning in the 1920s, the role of the speech language pathologist emerged in response to soldiers with brain injuries returning from the war. Over the next 100 years speech language pathology has grown and developed into a profession that offers a wide range of services for patients of all ages. Be sure to acknowledge Speech Language Pathologist for the role they play in healthcare!

The field of speech pathology began to grown in interest in the early 1920’s, as soldiers with traumatic brain injuries returned from the war (SpeechEasy, 2019). By 1926, the American Academy of Speech Correction was created (SpeechEasy, 2019).

The minimum entry level degree into the profession is a masters degree. However, some states require postgraduate experience as well. Certifications for SLPs are also available, with similar requirements to state licensures (Bureau of Labor Statistics, 2019; Speech Pathology Graduate Programs, 2019).