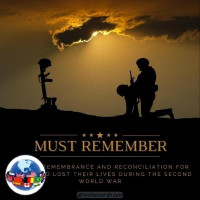 A relatively young holiday by generally accepted standards, it has been celebrated since 2005 annually on May 8 and 9. These dates were proclaimed in 2004 in a resolution of the UN General Assembly dedicated to the sixtieth anniversary of the end of World War II.

History of This Event

The resolution invites UN member countries, in addition to celebrating their official Victory and Liberation Days, to celebrate annually the Day of Remembrance and Reconciliation. One, two days a year (May 9 and 8) at the discretion of the state government. This day was introduced as a separate holiday as a tribute to the victims of war around the world. In 1945, on May 8, the Act of Unconditional Surrender was signed in Germany, the next day, May 9, was declared Victory Day.

The purpose of creating this holiday is to call on the current generation to be proud of their people, who contributed to achieving victory and saving humanity from enslavement by Nazism. Pay tribute to the tens of millions of people who gave their lives to achieve Victory, died on the battlefields, in death camps, in cities and villages. Realize your duty to the people who participated in the battles and died in the struggle for the freedom and dignity of man.

Every year there are fewer and fewer participants and eyewitnesses to this battle. The UN General Assembly stressed that it was this historic event that created the conditions for the creation of the UNPO in order to save new generations from the consequences of the war. All states that are members of the UN are joining forces in the fight against emerging challenges and threats, and are trying to resolve disputes and conflicts by peaceful means.

How to celebrate this day

The celebration of the Day of Remembrance and Reconciliation is included in the series of Victory Day celebrations in all countries, and is inextricably linked with this holiday. These days, flowers are laid at the monuments and memorials dedicated to the Second World War to honor the memory of the dead. Congratulations to veterans - participants of the Second World War. Pass solemn parades, processions. Concerts, festivities and celebrations are held on the streets of the city, salutes and fireworks explode in the sky.