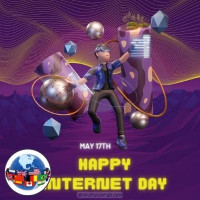 On the seventeenth of May, the Internet celebrates its birthday. It was on this day, in 1991, that the standard for the pages of the World Wide Web WWW was officially approved. Until that time, e-mail functioned, people could easily transfer data, as well as engage in newsletters in order to work with company clients.

May 17, 1991 officially approved the standard for the pages of the World Wide Web WWW (World Wide Web). Until that time, e-mail, data transfer and newsletters were already working to work with clients of companies. The invention belongs to Tim Berners-Lee, who was assisted by Robert Cayo.

With the advent of the World Wide Web, a new word “web” appeared in the everyday life of computer scientists (translated from English - “web”), the world learned about the creation of web servers, web pages and websites. For a complete touch on the new and wonderful Internet world, a small detail was missing - a special program that would download and open all these "webs" in a form that no longer surprises anyone today. This is how browsers were born.

The World Wide Web has made a splash on the Internet and has made a major revolution in the field of information systems. The Internet began to fill up and develop every second. It took two years to develop hypertext for the World Wide Web. Now thanks to HTML (Hypertext Markup Language) it is possible to create, store and display text.

Today, the World Wide Web is a network that connects millions of web servers that are dispersed around the world. Out of ignorance, people confuse the terms "Internet" and "World Wide Web". These are two different concepts. The functioning of the Internet without the Web is permissible (but then what can be done in it without films, photos, libraries and music), but the Web cannot operate separately from the Internet.